“The die is cast”, the famous few words uttered by Julius Caesar before crossing the Rubicon and changing the course of history. Yesterday, we probably witnessed a similar event: the spiralling out of control of the protests in Sri Lanka.

Before going through the latest developments, here is the relevant part from yesterday:

Since the time of publishing, the situation has escalated a lot: curfew was enacted, and security forces have been issued shoot-on-sight orders to quell the unrest. On top of this, the former PM was whisked to a naval base in the North East of the country, supposedly for a few days until the situation is normalised.

Given the current situation, it is unlikely for violence to subside in the next couple of weeks, especially as the peaceful protests against the governments have turned violent. President Gotabaya Rajapaksa, and brother to the PM, tried to calm the situation, but it is unlikely to succeed. Specifically, he said the following on Twitter: 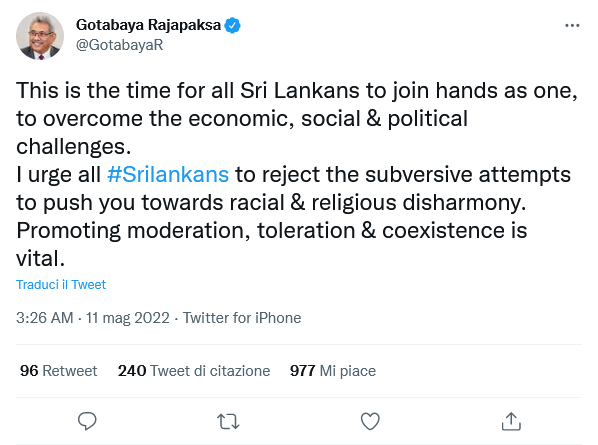 This appeal is unlikely to succeed, being at least partly responsible for what has been happening. While other factors have led the country to the current predicament, like China, his executive orders have played a key role and now he is the only political authority remaining.

This is problematic for two primary reasons:

This also further complicated matters for New Delhi, which was already invested in helping their neighbours. Ministry of External Affairs spokesperson Arindam Bagchi said the following after being asked about Sri Lanka:

“As a close neighbour of Sri Lanka, with historical ties, India is fully supportive of its democracy, stability and economic recovery. India will always be guided by the best interests of the people of Sri Lanka expressed through democratic processes.”

These few words, followed by an account of all the help the Indian government provided to Sri Lanka, show the current position: support the people while keeping quite a distance from the government and the Rajapaksa brothers.

Eventually, the Indians may have to step in and act as guarantor, as de facto they are already doing with the IMF proceedings. At the end of the day, there is nothing the Rajapaksas can do now to regain credibility, and it would be best to stop this before it goes even more out of hand. After all, as said yesterday, this little country is the most likely epicentre of a wave of protests the world has not seen since 2011, and that brought something that made the current war in Ukraine pale in comparison.

The only hope now is that it will be possible to avoid a further escalation of violence and to bring help to people that have been suffering much hardship. Sadly, this hope may be vain, as there does not seem to be widespread international acknowledgement of the kind of situation that has been brewing for months (including, but not limited to, between the UNSC members).

DISCLAIMER
This message contains information that may be confidential and/or privileged. If you are not the intended recipient, you should not use, disclose or take any action based on this message. This commentary contains forecasts, estimates, opinions, and other information that are subjective. Statements concerning economic, financial, or market trends are based on current conditions, which will fluctuate. There is no guarantee that such statements will be applicable under all market conditions, especially during periods of downturn. Although this commentary is based on information and data derived from sources that we deem to be reliable and accurate, these views are not guarantees of future performance or occurrence of certain events and involve certain risks, uncertainties and assumptions that are difficult to predict. Actual events, outcomes and results may differ significantly from the views expressed. The views and opinions contained herein should not be considered as investment advice or a recommendation of any kind. All information and statistics are current as of the date stated, unless otherwise noted, and we undertake no obligation to update them. If you would like clarification please contact info@intelligencequarterly.com.

How frequent are bear market rallies? »